Israel pounds Gaza, killing a pregnant woman and her child

At least three Palestinians, including a pregnant woman and her 18-month-old child, were killed by Israeli air attacks and artillery shelling on the besieged Gaza Strip.

Israeli launched more than 140 attacks after about 150 rockets were fired from the coastal enclave, injuring at least six people in Israel. 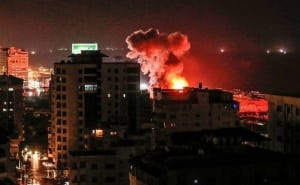 Israel’s military on Thursday warned Hamas against a further escalation in violence, and Israeli media said officials were considering evacuating residents from areas near the Gaza border.

“The way things continue to play out is significant. Hamas will understand in the coming hours, as in the past months, that this is not the direction it wants to choose,” a senior military official was quoted as saying on the military’s Twitter account.

Military officials were quoted as saying by local media that Israel is close to a military operation in Gaza in which “Hamas will be hit hard.”

Yuval Steinitz, a member of Prime Minister Benjamin Netanyahu’s inner cabinet, told Israel Radio: “We are not eager for war and are not interested in a broader confrontation, but at the same time it could certainly happen because we will not make any concessions to Hamas.”