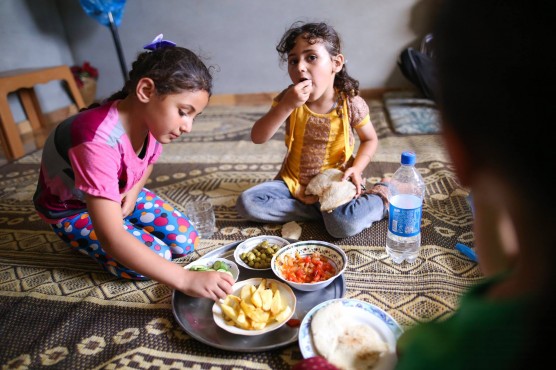 What Is Ramadan?
Ramadan Kareem or Ramadan Mubarak — either greeting expresses good wishes at the start of this sacred time. Every year at the sighting of a new moon on the ninth lunar month, the 30 days of Ramadan begin, and with them, a host of Ramadan traditions, including “sawm” — the practice of fasting from sunrise to sunset, which is one of Islam’s five pillars. Why? Ramadan is a sacred time of prayer, charity and contemplation marking the time during which Allah is said to have spoken the first verses of the Quran — or Islam’s holy text — to the Prophet Mohammed on Laylat al-Qadr, or “The Night of Power.” Now, it’s a month when “the gates of Heaven are open and the gates of Hell are closed and the devils are chained.”

To observe this holiness and show dedication to Allah and the word of Islam, Muslims use Ramadan to become more closely in touch with their spirituality, deepen their sense of humility, become closer to God and renew their religious selfhood through a series of spiritual and physical practices that last approximately 30 days and 30 nights — or as long as Ramadan continues on any given year. The most prominent Ramadan tradition is fasting, but the month also entails an increased focus on dedicated prayer as well as charitable efforts and initiatives. Muslims also make efforts to discourage any negative emotions, complaining, gossiping or swearing during Ramadan — all concentration should be on prayer, humility and positivity.

While there are special allowances for children and the elderly as well as Muslims who are pregnant, nursing, traveling or ill, fasting is a practice all Muslims must partake in each Ramadan to fulfill one of their sacred pillars of Islam. There are five pillars total — fasting, charity, prayer, testimony of faith and a pilgrimage to Mecca. The holy practice of sawm serves to reinforce religious values in a variety of ways. Not only does it provide Muslims with a renewed compassion for the poor by showing what daily hunger and thirst feel like, but it also reminds them of their frailty as humble humans and their dependence on Allah for sustenance while removing external distractions to let them focus on their faith.

Fasting isn’t just about abstaining from food. During Ramadan daylight hours, Muslims avoid eating, drinking liquids, taking medication, chewing gum, and engaging in sexual activity of any kind — some even choose to refrain from their favorite pastimes like watching television or listening to music in order to make more time to focus on prayer. Each day during this holy time, Muslim men, women, and children awaken well before dawn and eat a large meal — or “suhoor” — packed with protein and plenty of fluids to carry them through daylight hours until their next meal after dark, then they perform their morning prayer and prepare for the day.

While some businesses or schools in Muslim-majority countries may reduce their operating hours during the month of Ramadan, Muslims continue to go about their regular lives, jobs, and activities while fasting. When the day is over and the evening call to prayer signals the end of the fast, families and friends celebrate with an “iftar” or light meal before performing their evening prayer at home or in the mosque and coming together again for a larger meal later. This routine continues each day as Muslims around the globe observe Ramadan’s meaning.

While Ramadan is a time of holiness, charity, contemplation and spirituality meant to be spent with family in festivity, goodwill, prayer and celebration, the bombings of Gaza conflict still casts a shadow over many people in Palestine, making it difficult to observe Ramadan traditionally. Conflict, rising food prices, movement restrictions and lack of resources make life a daily struggle for refugees and vulnerable families in Gaza, the West Bank

With a damaged economy and a multitude of industrial sanctions, unemployment in Gaza has reached a rate of 43 percent, and it remains extremely high in the rest of Palestine, affecting agriculture, fishing, construction and other industries people rely on for their livelihoods. Because food is increasingly more expensive and access to nutritious choices is extremely limited, most people need to spend half of their small incomes on food — still, 1.6 million people in Palestine don’t have enough to eat and they have trouble affording other essentials like medicine and education.

With such a shortage in resources, Ramadan becomes very difficult for Muslim families in Palestine — planning nutritious suhoor and iftar meals is a challenge when there isn’t enough food, and large, celebratory family gatherings and feasts to share with the community are almost unthinkable. Economic difficulties also make it impossible for families to exchange gifts or purchase new clothing for Eid Al Fitr, let alone give anything to charity when they are already struggling.

As a non-profit, non-political, non-religious charitable group dedicated to easing suffering and addressing developmental and humanitarian needs in Gaza, S.O.S Gaza CHILDREN has been helping people in Gaza for3 years. By providing essential resources like food and water and working to give education and other needs in struggling areas, we work to rebuild communities and provide people with the tools they deserve to live dignified, self-sufficient lives in the midst of conflict.

This Ramadan, join us in our effort to rebuild disadvantaged, marginalized communities hindered by political and economic conflict. Your help will fund our efforts to provide personalized community attention to people in need — with Your help, we effect change and rebuild the lives of our neighbors and poor people in Gaza.
Make a donation today to change the life of a family forever