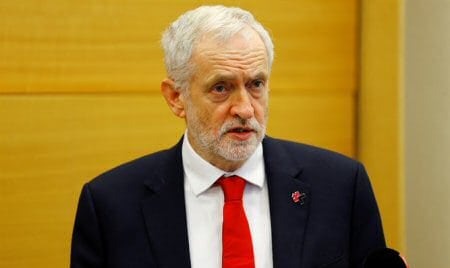 The leader of the British Labour Party has called on the British government to stop selling arms to Israel after the massacre of 31 unarmed Palestinians in Gaza.
For months, he has been the target of an ignominious campaign on the part of the Israeli lobby, which is calling him an anti-Semite at every turn to try to destroy his great popularity, condemned Tuesday the Israeli “violence”. and the silence of Western leaders about it.

“The dead and wounded by the Israeli army, facing unarmed protesters, is a shame,” said Corbyn, who could become the British prime minister.

“They have the right to protest against their appalling situation and the blockade continues, as well as against the occupation of Palestinian lands, and for the implementation of their right to return to their homes and their self-determination “.

A journalist was reported among the dead, on Friday, as Israeli troops opened fire during the second round of mass protests in eight days. Hundreds more were injured.

Protesters in Gaza have taken to the streets twice for the “March of Return” demonstrations, over Palestinians’ demand for a right of return to land lost to Israeli occupation in 1948.

31 Palestinians were killed and about 3,000 were wounded as Israeli occupation forces opened live fire against protesters