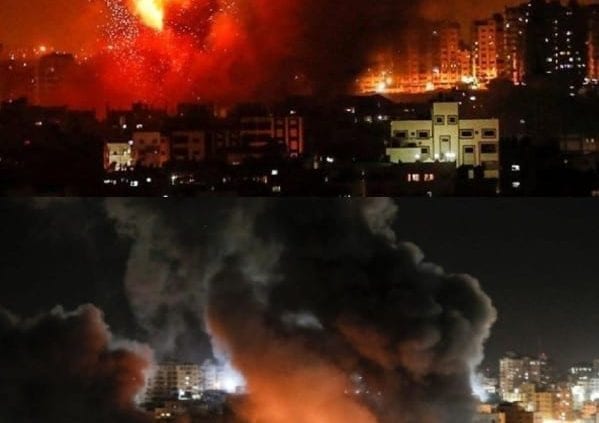 He said that the Israeli fighter jets bombed a site to the southwest of the Gaza city, and another in the city of Rafah in the southern coastal enclave.

Meanwhile, Israeli artillery opened fire on agricultural lands close to al-Bureij refugee camp and to the east of Rafah city.

Last night, Israeli attack helicopters pounded a site in the town of Beit Lahia in the northern coastal enclave.

The attacks resulted in material damages, but no human casualties were reported.

This came in retaliation for the launching of incendiary balloons from the strip towards nearby illegal Israeli settlement, setting lands and crops on fire.

Fourteen years following the Israeli “disengagement” from Gaza, Israel has not actually disengaged from Gaza; it still maintains control of its land borders, access to the sea and airspace.

Two million Palestinians live the Gaza Strip, which has been subjected to a punishing and crippling Israeli blockade for 12 years and repeated onslaughts that have heavily damaged much of the enclave’s infrastructure.

Gaza’s 2-million population remains under “remote control” occupation and a strict siege, which has destroyed the local economy, strangled Palestinian livelihoods, plunged them into unprecedented rates of unemployment and poverty, and cut off from the rest of the occupied Palestinian territories and the wider world.

Gaza remains occupied territory, having no control over its borders, territorial waters or airspace. Meanwhile, Israel upholds very few of its responsibilities as the occupying power, failing to provide for the basic needs of Palestinian civilians living in the territory.

Every two in three Palestinians in Gaza is a refugee from lands inside what is now Israel. That government forbids them from exercising their right to return as enshrined in international law because they are not Jews.

Ramadan 2021 In Gaza
Scroll to top