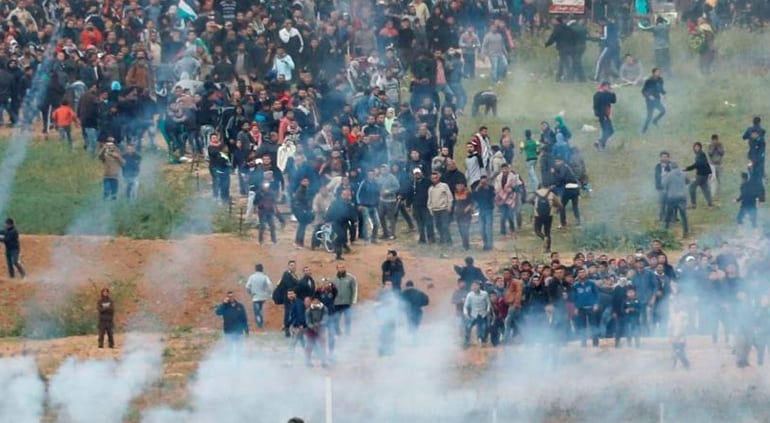 Israeli authorities must put an immediate end to the use of excessive and lethal force to quell Palestinian protests in Gaza, Amnesty International said as new protests began Friday (April 13th).

After the death of 26 Palestinians, including three children and a photojournalist, Yasser Murtaja, and injuries to some 3,078 others during protests on two previous Fridays, Amnesty International calls once again for independent and serious investigations into reports that Israeli soldiers used excessive force, including firearms, against unarmed protesters, in violation of the law.

“For the past two weeks, the world has watched with horror as Israeli forces use excessive and lethal force against protesters, including children, who are demanding the end of violent policies against Gaza and claiming their right to live in Gaza. dignity. Magdalena Mughrabi, Deputy Director for the Middle East and North Africa at Amnesty International, said Magdalena Mughrabi.

“The Israeli authorities must urgently change their policies and respect their obligations under international law. Their revolting use of live ammunition against unarmed protesters and the resulting deaths must be investigated to determine whether unlawful killings have occurred. ”

“The Israeli authorities must respect the right of Palestinians to demonstrate peacefully and, in case of violence, use only the force necessary to respond. Under international law, lethal force is legal only when it is strictly unavoidable to protect against an imminent threat of death. ”

Direct witnesses, as well as videos and photos taken during the demonstrations, show that in some cases unarmed Palestinian protesters were targeted by Israeli snipers while shaking the Palestinian flag. or that they ran away from the fence.

Those injured since Friday 30 March include approximately 445 children, at least 21 members of the Palestine Red Crescent emergency teams, and 15 journalists. According to the Gaza Ministry of Health, some 1,236 people were hit by live ammunition. Others were injured by rubber bullets or had to be treated after inhaling tear gas dropped by drones. The World Health Organization was worried that nearly 350 injured people would remain temporarily or permanently disabled. To date, at least four people have had one leg amputated.

On two consecutive Fridays, tens of thousands of Palestinians – men, women and children – gathered in five camps about 700 meters from the fence that separates the Gaza Strip from Israel to reaffirm their right of return. ‘demand the end of the Israeli blockade, in place for nearly 11 years. Although the demonstrations were largely peaceful, a minority of demonstrators threw stones and, according to the Israeli army, Molotov cocktails towards the fence. According to Israeli forces, the people who were killed were the “main leaders” or tried to cross the fence between Gaza and Israel. No casualties were lamented on the Israeli side.

The Israeli army said it would investigate the behavior of its forces during protests in Gaza, but Israeli investigations routinely flout international standards and almost never lead to prosecution. As a result, serious crimes against Palestinians generally go unpunished.

In a statement on 8 April, International Criminal Court prosecutor Fatou Bensouda expressed her concern over the Palestinian dead and wounded, recalling that her office had initiated a preliminary examination of the situation in Palestine.

“There is an urgent need for accountability, not only for this latest wave of violence that is characterized by excessive and lethal force by Israel, but also for all those decades of possible unlawful killings, including extrajudicial executions, and other crimes under international law. ”

The protests, known as the “Great March of Return”, began on the occasion of Palestine Earth Day. Protesters are demanding the right of millions of Palestinian refugees to return to their villages and towns that are now in Israeli territory.

The action of the Palestinians is expected to last until May 15, when they commemorate the Nakba, or “great catastrophe”. This day

Our Ramadan Baskets delivered thanks to your donations
Scroll to top