In Gaza, the strategy of the Israeli army implicated by the large number of wounded by bullets

Since the beginning of the “return march”, nearly 1,500 civilians have been wounded while demonstrating unarmed and on the Palestinian side of the fence. 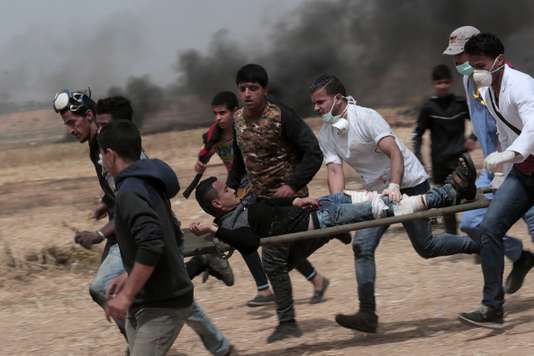 He guesses what they feel. He understands the conditions in which they target, shoot, wound, sometimes kill.

Nadar Weiman was a member of a sniper squad in the Nahal Brigade Reconnaissance Unit between 2005 and 2008. He became an activist with the Breaking the Silence organization, which collects soldiers’ testimonies, he thinks a lot about the shooters deployed along the Gaza border, facing the protesters.

“They are so close to the Palestinians that they can see the expressions on their faces, in the viewfinder. This is up to about 350 meters.

They are lying on the sand hills. They are not hit by projectiles. They can breathe, think. If the rules of engagement say you have to target the leaders, it’s up to them, 20-year-olds, to decide who they are. ”

Since the beginning of the “Great Return March”, gathering every Friday since March 30, thousands of people along the Gaza Strip, Israeli soldiers have killed 39 Palestinians. But the most telling is the number of bullet wounds: about 1,500, according to local medical authorities.

Several cases were filmed, nourishing the image effect sought by Hamas. This large number involves, above all, the rules of engagement adopted by the Israeli authorities. Unlike use, non-lethal means are not privileged. According to the army, the wind would reduce tear gas; Rubber bullets and water cannons would be ineffective because of distances.

A sense of impunity
“It’s SCANDAL to shoot children! The United Nations (UN) coordinator for the peace process, Nikolay Mladenov, was killed on Twitter after the death of a 14-year-old teenager on April 20 with a shot in the head. “The lives of Palestinians in Gaza have always been cheaper than in the West Bank.