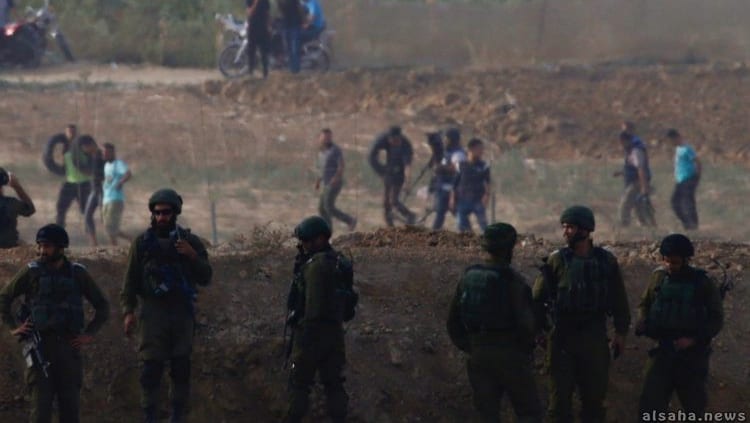 A black cloud covered the area of the security fence east of the town of Khuza’a east of Khan Younis in the southern Gaza Strip. The demonstrators threw a large number of rubber tires to cover the Israeli occupation center, behind dirt barriers inside the fence.

n those moments, demonstrators chose to move to a new place to demonstrate east of the town of Khuza’a, thinking that it would reduce the amount of human losses, but the occupation army pushed dozens of soldiers to the place; and they were shot directly without prior warning or warning.

With each caliber, demonstrators were running towards a person who fell to the ground to find him in the upper part of the body. They carried him on their shoulders, thinking that he had been martyred, and ambulances could not transport all the injuries. Every minute a number of demonstrators were killed.

The first victim was a woman in her forties, with the Palestinian flag under the cover of the burning tires. An Israeli sniper shot her in the back. At the same time, a young man was shot in the thigh.

Demonstrators intensified the firing of tires to cover the occupation soldiers, who did not use any gas bomb unusually in the weekly demonstrations. The loudspeakers were loud and loud in the ranks of the demonstrators, and with them the bullets of live ammunition rose, and the toll of injuries increased even more, most of them in the upper part of the body.

A young man was wounded in the stomach, another in the chest, a third in the neck, a fourth in his mouth, a fifth in the head, a sixth in his heart, and so on.

A 14-year-old boy fell to the ground as he stood between the demonstrators and the security fence. As he was getting out of the area, another man heard a young man in the mouth.