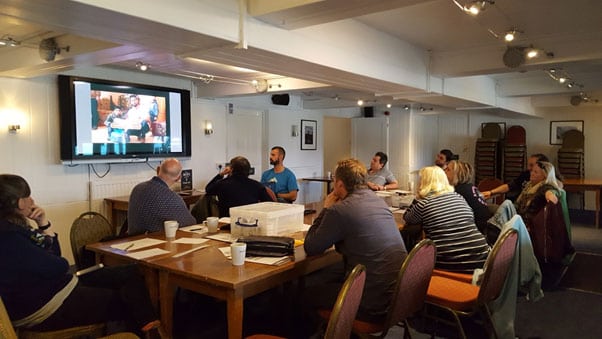 On 17th March 2018 the committee of the Cornwall & Isles of Scilly National Union of Teachers met to watch a video made for us by SOS Gaza Children, a charity based in the Gaza strip in Palestine. The committee had earlier decided to make a donation of £250 to the charity, to support traumatised children growing up in Gaza with their basic needs and to improve the quality of their difficult lives.  As an elected body we have a responsibility to make sure any donations we make go to the intended recipients, so we asked SOS Gaza to send us an account of how they spent our money. This video was their response.

The video was very moving as it showed all the families receiving bags of food provided by our donation, but the team also told us how other hungry families who were not on the team’s list had turned up at the distribution point and demanded food, which the team could not give. Such was the desperation of these families that they even tried to take food by force. Luckily no-one was hurt but the team was shaken and shocked by what happened.

We discussed sending a further donation. The SOS team was asking for money for medical expenses, clothing and food for impoverished children and also trying to plan a school outing and to construct a safe children’s play area. The committee then agreed to pledge a further £250 to go towards a school trip for the children to enjoy and get some respite from the harsh conditions of their life. We also publicised the SOS campaign through our newsletter across Cornwall.

Unfortunately, what followed was an escalation of violence and deprivation as the massacres of the Great Return March began, and President Trump cut UNWRA relief funding for Palestine. The team was working tirelessly to meet the needs of local impoverished children and families, but were desperately short of funds. So we agreed that in these urgent conditions SOS Gaza should use our latest donation wherever the need was greatest.

We urge any readers to support the work of this young Palestinian team in trying to improve the lives of children in Gaza, working under the most difficult conditions themselves. We salute their courage, endurance and compassion and appreciate the real difference their campaigns make to the lives of deprived and traumatised children and families.

We in the Cornwall & Isles of Scilly NUT will continue to work with other organisations in Cornwall to raise money for children in Gaza until the blockade is lifted and Palestinians win back their basic human rights, freedom, statehood and safety.

Gaza under bombardment Israel pounds Gaza, killing a pregnant woman and her...

We may request cookies to be set on your device. We use cookies to let us know when you visit our websites, how you interact with us, to enrich your user experience, and to customize your relationship with our website.

Click on the different category headings to find out more. You can also change some of your preferences. Note that blocking some types of cookies may impact your experience on our websites and the services we are able to offer.

These cookies are strictly necessary to provide you with services available through our website and to use some of its features.

Because these cookies are strictly necessary to deliver the website, you cannot refuse them without impacting how our site functions. You can block or delete them by changing your browser settings and force blocking all cookies on this website.

These cookies collect information that is used either in aggregate form to help us understand how our website is being used or how effective our marketing campaigns are, or to help us customize our website and application for you in order to enhance your experience.

If you do not want that we track your visist to our site you can disable tracking in your browser here:

We also use different external services like Google Webfonts, Google Maps and external Video providers. Since these providers may collect personal data like your IP address we allow you to block them here. Please be aware that this might heavily reduce the functionality and appearance of our site. Changes will take effect once you reload the page.